CodeIgniter 2.0 is out with cool features! 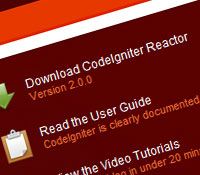 I know its a bit late, CI 2.0 has been out since January 28th, 2011, but lets talk about it anyway and recapitulate some of the new features of this framework. The new stuff is great, and this time I believe it deserves a second look if you are not much into CI.

Let me thank in advance the guys of the CI team for their great work.

According to the official CI official announcement, here’s what we have:

And the following features are only present in CodeIgniter Reactor (the one you should use):

And if you need Modular Extensions for 2.0: http://bitbucket.org/wiredesignz/codeigniter-modular-extensions-hmvc/overview